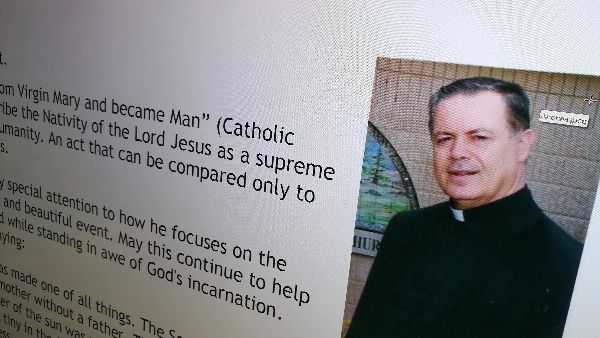 Abouna's Message of the Month

Dear brothers and sisters, members and friends of the Holy Family,

I would like to thank all the volunteers and teams who worked so hard for the Church Annual Dinner held Sunday November 3rd. It was a traditional Lebanese delicious meal. We thank all the volunteers who worked and donated toward the support of school education for children living in Lebanon, at the November 20th breakfast. Thank you for your generous contributions. Our thanks also go to all organizers and sponsors of the Craft and Bake Sale November 22 and 23. We thank families who hosted the breakfast on Sunday November 24 and all parishioners who generously contributed in the fundraising breakfast and all breakfasts and all other church events along the years.

During this month of December, two feast days come to mind, Saint Barbara December 4, and the Immaculate Conception December 8. And of course when we say December, it is the Christmas month, where Christmas is the main focus. It is the celebration that involves all ages and generations.

In the Creed we say: "He was incarnate by the Holy Spirit from Virgin Mary and became Man" (Catholic Creed). The Church Theologians describe the Nativity of the Lord Jesus as a supreme act of humility and modesty towards humanity. It is an act that can be compared only to His Passion and Crucifixion on the Cross, according to the Church greatest theologian ever, St. Augustine of Hippo, who invites us to pay special attention to how he focuses on the paradox of the event. It is an Amazing and beautiful stuff. May this continue to help us adore and delight in the Christ child while standing in awe of God's incarnation.

Saint Augustine describes the event saying: "He, who by whom all things were made was made one of all things. The Son of God by the Father without a mother became the Son of man by a mother without a father. The Word Who is God before all time became flesh at the appointed time. The maker of the sun was made under the sun. He Who fills the world lays in a manger, great in the form of God but tiny in the form of a servant; this was in such a way that neither was His greatness diminished by His tininess, nor was His tininess overcome by His greatness". [St. Augustine, Sermon 187 1,1]

The Holy Family Choir and the Faith Formation Children will be pleased to offer to you in the spirit and atmosphere of Christmas, the annual Christmas Concert play jointly, on Thursday December 19 at 6:00 PM. On behalf of all the community, I extend my appreciation and thanks to all adults and children choir, Faith Formation ad MYO members and their teachers, who dedicated long time and efforts in choir practices with great passion and joy in order to offer to you a nice and colorful bouquet of Christmas Carols and songs.

Christmas donations and giving are appreciated as part of a fundraising and help for covering the choir and faith formation needs and equipment. The Christmas concert title is: "Peace on Earth and Mercy Mild, God and sinners reconciled". The Angels in Christmas Night sang to the shepherds saying: Glory to God in the highest, and Peace on Earth and Good Hope to All. Let us pray for the Peace on Earth, especially in these days where violence and terrorism are exploding everywhere. Even in the time of Christmas, Herod the tyrant killed all the firstborn children of Bethlehem. This shows us that no matter to what degree the evil forces work, the Divine Christ’s Peace (Pax Christi) will reign forever. Let us be on December 24 and 25, among the poor humble shepherds and the 3 Magi Kings around the manger, filled with the heavenly presence of the angels in our lives, singing Happy Birthday to Jesus, our Savior.