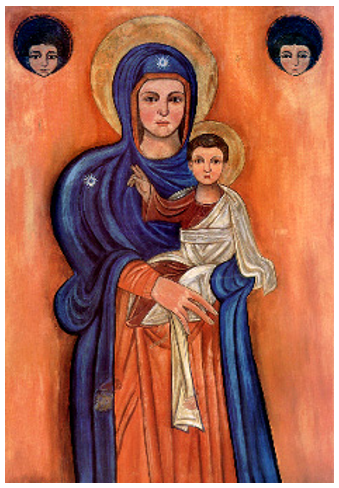 The Maronite Church has always been a Marian Church. From the beginning, Maronites have claimed a special devotion to the Mother of God. In the small villages, homes, mountains, hills and streets of Lebanon are found shrines of all types to Our Lady. Hymns, feast days and the liturgical life of the Maronite Church clearly express this great devotion to the Blessed Mother.

The aroma of your holiness fills the whole universe.

Pray for us, O Mother of God, that we may be the sweet perfume of Christ,

Reaching throughout the whole world…."

Our Lady of Lebanon, pray for us, and enable your Maronite Church to be an everlasting gift for the universal Church and for the world. 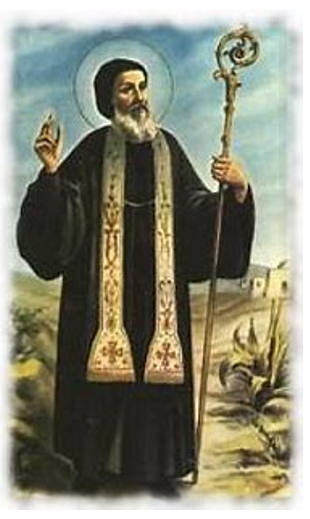 Saint Maron (also spelled Maroun) is the spiritual father of the Maronites, and the saint from whom the Maronite Church draws its name. Of all the Eastern rite Churches, the Maronite Church is the only one known by the name of a person—St. Maron. Born in the middle of the fourth century, St. Maron was a hermit, who, by his holiness and the miracles God worked through him, attracted many followers. After his death in the year 410 A.D., his monastic disciples built a large monastery in his honor, from which other monasteries were founded.

The followers of St. Maron, both monks and laity, were always faithful to the teaching of the Pope. The Maronite Church is the only one among the Eastern Churches that has always maintained its bonds with Rome and the Successor of St. Peter. In fact, in 517, as controversy continued to rage over the decisions of the Council of Chalcedon (451) regarding Christ as "true God and true Man," persecution of the Maronites broke out which resulted in the martyrdom of 350 Maronite monks on account of their defense of the Council’s decrees. Because of this, the Maronites were also known as the "Chalcedonians." Even today, on the feast of Saints Peter and Paul, our liturgy prays: "O Lord, preserve your children from all error or deviation, grant us to live and die proclaiming: ‘Our faith is the faith of Peter, the faith of Peter is our faith!’" During the seventh century, the Maronites again suffered persecution and fled for refuge to the mountains of Lebanon. There they maintained and grew in their Christian faith and culture. At the time of the Crusades, close bonds were established by the Maronites with the West which have endured to this day. Later on, the Holy See sent missionaries to Lebanon, and in 1584, Pope Gregory XIII established the Maronite Seminary in Rome. Thus, throughout history, there have been continuous and close relations between the Maronites in the East and western countries in Europe. 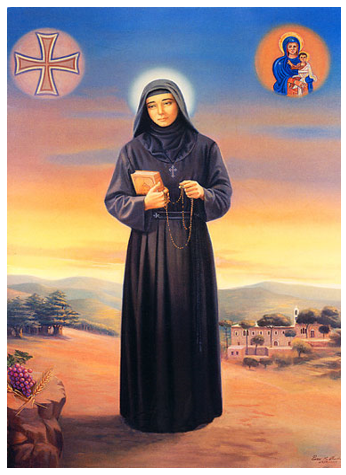 Saint Rafka, also known as Saint Rebecca, was born in the small village of Himlaya on the mountain slopes of Lebanon in 1832. At the age of 21, she entered the Order of Sisters which later dissolved in 1871. In that same year, she entered the Lebanese Maronite Order. For the next 26 years she lived and worked at the Convent of Saint Simon. On the feast of the Holy Rosary 1885, Rafka prayed to our Lord that He might allow her to share in the suffering of his crucifixion. From that night on, her health began to deteriorate and soon she became blind and crippled, yet she rejoiced in being made worthy to participate in the suffering of our Lord. After years of acute pain, she died on March 23, 1914, at the Convent of St. Joseph in Lebanon, and since then, many miracles have been attributed to her intercession. In 1985, Pope John Paul II raised her to the honor of the altar, proclaiming her "Blessed" and in 2000 she was canonized a "Saint."