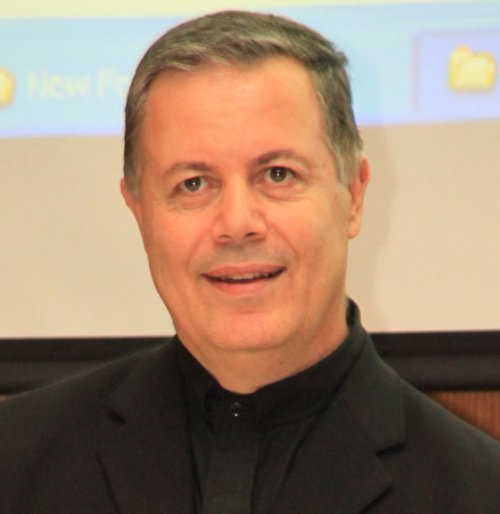 Abouna Emmanuel Nakhle-Ghorr was born on February 16, 1960 in Baabda, the region capital of Mount Lebanon province in Lebanon, and is a Maronite Catholic Lebanese citizen. He was educated at the Ecole de la Sainte Famile Française and the College des Peres Antonins, both in Baaba. He became a member of the Antonine Maronite Order in 1978, and in 1980 pronounced his religious vows.

Abouna Emmanuel studied Philosophy and Theology at St. Thomas Pontifical University in Rome. He was ordained priest at Saint Elias Antelias Basilica in Lebanon on September 13, 1986. He returned to Rome to study Music and Architecture until 1991.

Abouna Emmanuel began his ministry at Our Lady of Lebanon Maronite Church of Toronto, Ontario (Canada) in 1991, and he became a Canadian citizen in 1995. He continued to serve in Toronto until October, 2011.

After his time in Toronto, Abouna Emmanuel's ministry took him to Rome, Dubai, and the Sultanate of Oman. Most recently he was appointed Pastor of Holy Family Maronite Church in St. Paul in February of 2016. He continues to serve God under His Excellency Bishop Elias Abdallah Zaidan of Our Lady of Lebanon Maronite Eparchy of Los Angeles.

Abouna Emmanuel is an accomplished musician; he plays keyboards and is a talented singer. In addition to his degree in Music Theory and Solfeggio from the Conservatory of Saint Cecilia in Rome (1987), he has a Bachelor of Arts in History from York University in Toronto (1997), and a Master's degree in Management and Leadership from Liberty University in Lynchburg, Virginia (2012). He was also a student of Architecture at the State University of Italy in Rome, and faculty of La Sapienza Architecture from 1988 through 1990.

Abouna Emmanuel is fluent in Arabic, French, English, and Italian, and has a strong background in Ancient Syriac / Aramaic language and manuscripts.

In addition to the above, Abouna Emmanuel was a Chaplain of the Antonine Association of Scouts of Independence from 1991-1992 and again from 1997-2002. He conducted the Antonine Conservatory of Baabda Choir in ordination celebrations in 1990. He also founded Our Lady of Lebanon Church Scouts group in Toronto in 1994 and supervised it until 2002. Abouna Emmanuel has been a Chaplain of the Saint Jose Knights of Columbus in West St. Paul since 2015.

Abouna Emmanuel may be reached at: