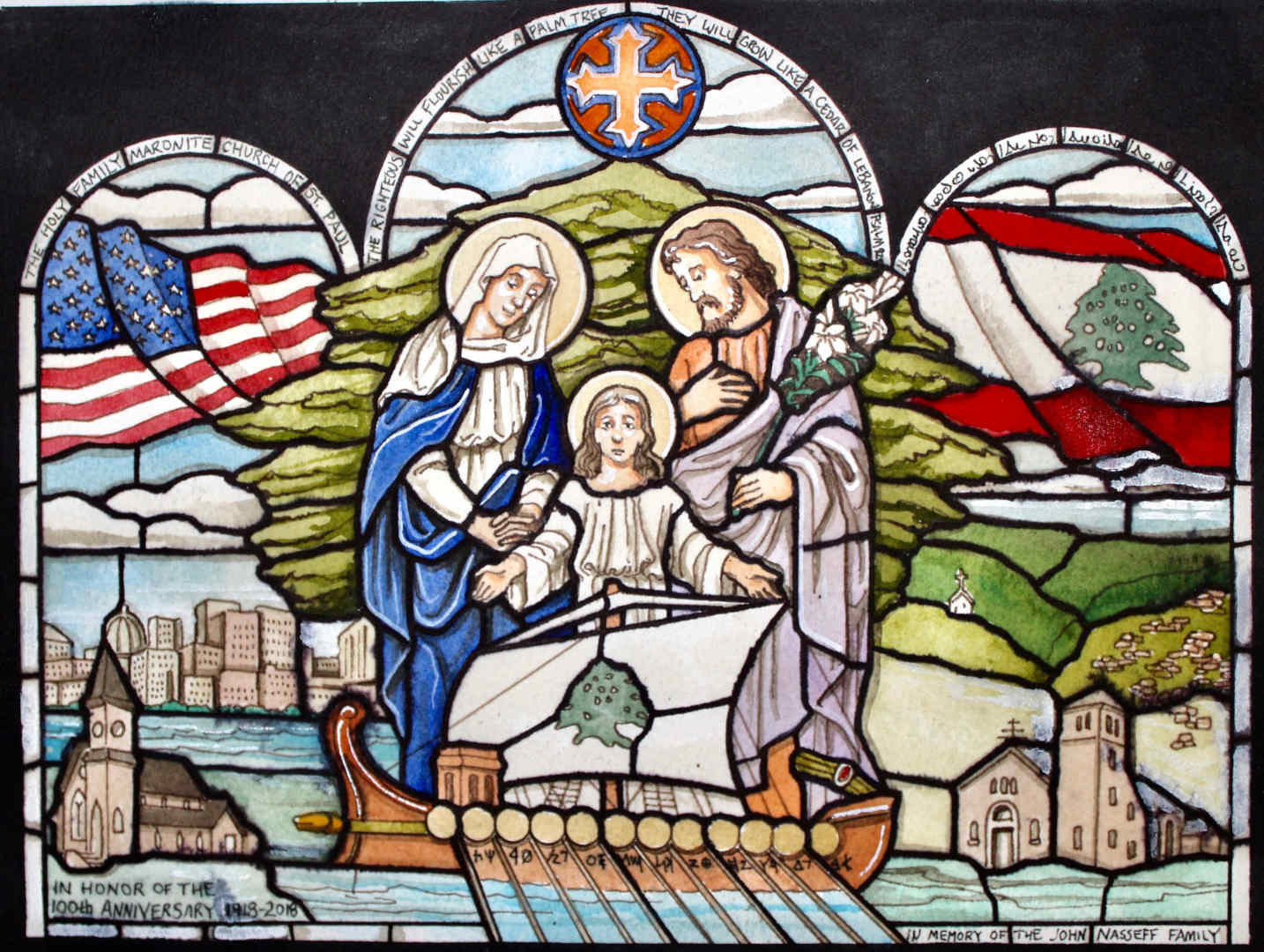 Click on the circles inside the following Icon for specific descriptions or read the whole narrative below it.

The Stained Glass window commemorating the 100th Anniversary of the Holy Family Maronite Church of Saint Paul takes the shape of the existing church’s Saint Cecilia Stained Glass shape, but bigger in size.

The central section includes a design of the Holy Family, with the Virgin Mary and Saint Joseph holding a Lily that symbolizes him and the Child Jesus in the middle, which is the center of the whole design. Jesus was 12 years old, during the visit of the Holy Family to the Temple of Jerusalem. It is the closest design to the traditional design used by the church for decades. A Cedar of Lebanon is in the background. It is a historical symbol of Lebanon's identity. It is also a symbol of the Virgin Mary who, in the Maronite Marian Litany, is described as the eternal and pure "Cedar of Lebanon". Lebanon and its Cedars are also Biblical symbols where the Bible spoke so highly of their beauty and might, tens of times especially in the Psalms and the Song of Songs.

The section below the Holy Family, shows an ancient Phoenician Lebanese ship, symbol of immigration and expansion. The Phoenician expansion and trade dominated the Mediterranean Sea for over a thousand years in Ancient History. The ship also symbolizes the Virgin Mary, "The New Ship that held the Great Treasure, Jesus Christ, carrying Him in her womb" (Maronite Liturgy). The Ship symbolizes the Church with its 12 Apostles sailing the seas of this World.

The Phoenician ship shows the Phoenician Alphabet that they invented (first time ever on a Stained Glass, and it is oriented from right to left). This 1st Alphabet in Human History was invented by the Phoenicians in the 20th century BC, that the Ancient Lebanese spread all over the Ancient World through their famous trade sea ships across the Mediterranean Sea and most probably across the oceans, as it was narrated by one the Greek mythological legend of Cadmus and his sister Europe (who gave her name to the European continent), both children of the king of Tyre Agenor 2,000 BC. This legend with historical content, was mentioned in Herodotus the Greek Historian in his book of the "History of the World, part one". Herodotus, the Greek historian legend, said that: Europe, the princess of Tyre, who was an extremely beautiful woman, while walking and swimming in the Mediterranean sea port city of Tyre in south Lebanon, attracted the Greek god Zeus who happened to be walking by. Zeus, the Greek god, transformed himself into a bull and kidnaped Europe to Greece. Agenor, the king of Tyre, ordered his son Cadmus to sail, with a fleet, to Greece, to look for his sister Europe. In order to communicate with the Greeks, he started teaching them the Phoenician Alphabet and founded, with his fleet expedition, a Phoenician colony that was named Thebes (The Beautiful), a few miles from Athens. And Herodotus said that Greece, and all the continent, took the its name from the beautiful Phoenician princess of Tyre, Europe, whose name, by the way, means the Occident, or the West, or the sunset. And of course, Europe is to the west of Lebanon or Phoenicia, or Tyre. The Greeks adopted the Phoenician alphabet and today, it is still 90% similar to the Phoenician alphabet but reversed from left to right. This first phonetic Alphabet was formed by 22 characters based on the human mouth capacity of pronunciation, called the phonetic system.

The left side of the design includes a view of the city of Saint Paul and the Cathedral over the Mississippi River, and the design of the 1st church that existed between 1918 and 1950. This left side is crowned by the American flag waving in the sky.

The left side arch frame area shows the Holy Family Church name in English. The right side arch shows the Holy Family name in Syriac Aramaic writing, the traditional language of the Maronite Church, and the language spoken by the Lord Jesus, pronounced: "Knushto Dessarto Qadishto Moroonoito Dmor Phaulos Mdinto, batro d Minnesota". The central arch frame area shows a Bible famous verse from book of Psalms 92:12 that says: "The Righteous flourishes like a palm tree and grows like a Cedar of Lebanon".

The design contains a dimension of history in Chronological way that goes from right to left, and from East to West, from Phoenicia to Europe and Africa, from Lebanon to the United States, from the Valley of Qadeesha to the city of Saint Paul. The Maronite Cross is placed in center above the Cedar of Lebanon marking the identity of the Catholic Maronite faith of the Community. The text at the left side marks the Centennial celebration.

This Stained Glass Window was made by the generosity of Arthur and Susan Nasseff in memory of John Nasseff family, as indicated in the text below to the right.

The design concept, details, content and sketches were made by Fr. Emmanuel Nakhle with the assistance of Chorbishop Sharbel Maroun, and executed by Gaytee Stained Glass Company in Minneapolis and its designer David Fode.

The Window has been dedicated and blessed by His Excellency Elias Zaidan the Maronite Bishop of the US Eparchy of Our Lady Of Lebanon of Los Angeles, and Auxiliary Bishop Andrew Cozzens of the Roman Catholic Archdiocese of Saint Paul, Saturday October 13, 2018.